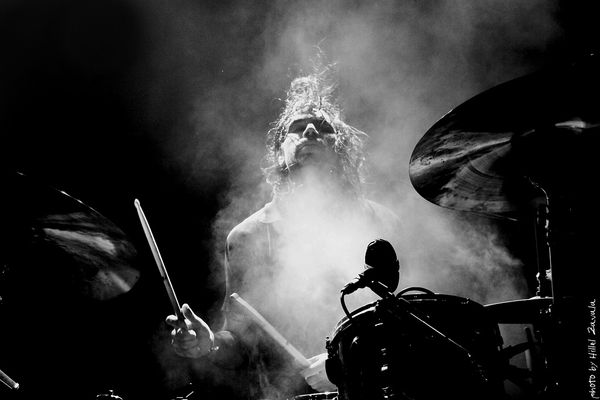 Russian Circles drummer Dave Turncrantz talks the process of recording their amazing new record Blood Year, his work with Riddle of Steel and the small scene they operated in, how to describe your band to cops/border patrols, the unshakable John Stainer influence, knowing when to slow down parts for musical impact, Meshuggah ruling live, Dave's fascination with Black Metal, the specific room at Steve Albini's Electrical Audio Studio that Dave recorded drums in for BY, studio momentum and nailing songs in two takes, leaning on protools to minimize takes and how the first couple takes are always the best, copper, brass, steel, aluminum snares, and other gear nerdery, blast beats, bedroom kits, rehearsal spots in NY, Russian Circles experience opening for Tool, tune bots & more!! 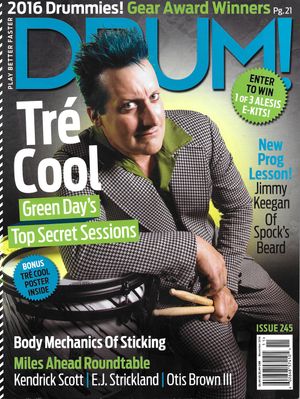 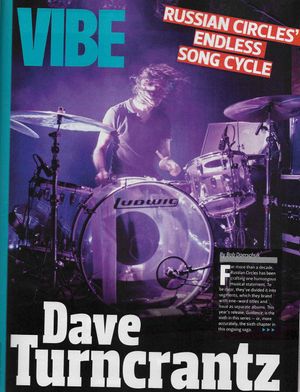 Dave Turncrantz is featured in Issue #245 of Drum Magazine, on newsstands now.

A sustained career in a heavy genre is a marathon event. After a certain number of years amplifying the volume and aggression in every album, you come to the realization decibels and BPM are finite resources. As bands like Baroness and Converge have alluded to in interviews, the creative and physical tolls of vying for a more crushing sound on each album gives way to new avenues for finding the heavy.

Russian Circles have come to their own understanding of this phenomenon. It’s been ten years since the release of the Chicago outfit’s first album, Enter, and their talent for infusing discordant aggression into Post-rock, a genre known for more emotional leanings, has only grown with time. After guitarist Mike Sullivan and drummer Dave Turncrantz incorporated hardcore veteran Brian Cook on bass and keys on their second album, Station, the trio have made a calling card out of sparse soundscapes and torrential squalls.

Their sixth studio album, Guidance, comes out later this week and capitalizes on the voiceless roar the band has developed over their career with a new type of “heavy” coming in part from producer Kurt Ballou. We talked with drummer Dave Turncrantz about the writing process, recording with Ballou, and developing a sound over the course of a decade.

How long were you guys on tour in support of Memorial?

Oh man, it’s been about three years since the record was released, so we’ve been on and off touring for the past two and a half years, which is a lot. We played all stuff from Memorial on our last time through Europe, our third or fourth time, so we’re glad to be playing some new stuff now.

How did you start developing new songs?

We took some time off to write, but Mike [Sullivan, guitarist] and I both live in Chicago while Brian [Cook, bassist] lives in Brooklyn. The way it usually goes is Mike and I will collaborate and get all the riffs that Mike has down; he usually has like 200 riffs, and maybe 13 of them will be something we can use. The other ones can be too low or not the right style, but Mike’s super creative with coming up with a ton of different riffs.

We go about it in a way that Mike and I kind of make a skeleton of the song, and then Brian will give it more form. So it’s usually me and Mike at the beginning of the process and Brian comes in to shape it up.

Memorial had a very cohesive theme, it was like an aural experience of death and the grieving process. Did you guys have any thematic points of reference writing the new album?

I feel like the new one’s definitely in the same vein as Memorial, maybe a little heavier. Obviously with Kurt Ballou it’s going to be heavy. I love Electrical Audio [recording studio for Memorial], but when it comes down to grit and distortion, Kurt Ballou’s kind of the king of picking that up, all that good fun stuff.

Last year was definitely a weird time for us because it was the longest period of time we had spent not touring. Writing and the record was actually coming together really fast, but it was just the waiting process from the recording to the record coming out was really long as well. We needed guidance all through last year, so it definitely made sense [to name the album Guidance].

Dave Turncrantz Talks to Istanbul About "Guidance" and more

This month we got a chance to catch up with Russian Circles drummer and Istanbul Agop artist Dave Turncrantz. Russian Circles are hitting the road this summer and fall, if they stop near you, check them out, you won’t regret it. Their new record Guidance drops August 5th, 2016, you can check out a preview here. Dave is an incredible drummer, and a great guy; we’re happy he’s part of the Agop family.

A: Does being an instrumental band influence the way you write drum parts?

DT: I think being an instrumental band makes everything more exposed and it makes me try to do things a little more musically. There are only three of us in the band so everyone needs to pull their weight to make things interesting live and in the studio. I think the hardest part of being an instrumental band is filling out the empty spaces a singer would normally fill up or another guitar player. Luckily for me, I play with two amazing musicians that have a good ear and are great at layering to fill everything out.

A: What was the process like working on Guidance?

DT: The process we use for writing every Russian Circles record has always started with just drums and guitar. Our guitarist Mike Sullivan and I will go through a number of guitar riffs he’s been working on and once we both agree on something will start from there. Once we get a structure we both are happy with, Brian comes in and we start to form the riffs into a song. Its been a process that has worked on the last five records and its nice to get a different view of the song once Brian comes in with the Bass.